You are here: Home / Embrace Disruption Blog / What Happened At CrossMedia Toronto: Part ...

We’ve received your email requests about the second part of the Cross Media Toronto coverage, and don’t fret – we’re going to deliver the goods! The afternoon started off with a bang – as we were able to hear from Ribbon.co’s Hany Rashwan.

Hany came to talk about the innovative work they’re doing at Ribbon in order to make the purchase conversion higher within the social networking space. If you’re a retailer, or even someone who’s selling product independently online – you NEED to check out the cool stuff that Ribbon is doing. As good as Hany’s presentation was, there was one thing that really stood out to us:

Then came bit.ly’s Brian Eoff  who chatted about the BitCoin – something he claims is worth it’s weight in gold. Brian was clever enough to send some of his gold to a lucky audience member (to the tune of $50 worth). The one thing that really stood out to us from Brian’s presentation was:

RT @TessaSproule: It's not how big your data is, it's how you use it. Big data only important as the insight u get i #cmto13

After that came Trendrr’s Mark Ghuneim who spoke to the value of social TV.

How many out there are binge viewers? What are you binging on? It's been Mad Men and Breaking Bad for me #cmto13

Sadly after Mark’s presentation we had to duck out – but can say without a doubt, we’ll be back next year. We’ll leave you with something that we thought was really stand out about the conference – a LinkedIn wall. Yes, every single attendee who had a LinkedIn profile was on display near the entrance. Genius? We think so.

Genius idea to have a LinkedIn wall at the conference. Can you spot me? #cmto13 pic.twitter.com/xbtKM4RPkN 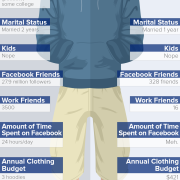