Social Media Brings a New Dimension to “Glee” for Fans

What is a television show to do when they want to stay on the top of everyone’s mind and create buzz? Have their cast/crew and fans take to social media, of course! Although it may have been the Beliebers who were among the first to capitalize on Twitter trends, fans of Glee have jumped on the bandwagon creating trending phrases not only about the show, but about the actors themselves. It seems like a regular occurrence that Glee’s leading lady Lea Michele is tweeting out sweet messages like this one: These messages show the fans that the cast members do see messages of support and appreciate them. Trending topics are amazing because they bring a certain topic or events to public attention and offer opportunity to find out more about it by clicking on “Why Is This Trending?” or visiting WhatTheTrend.com

Social Media Gives Fans an Inside Look on Set

The Glee fandom is notorious for getting inside looks of the set during the filming of upcoming episodes. It is often said that the best thing to happen to the Glee cast & crew was the invention of phone cameras & Instagram. The biggest addicts of the popular photo-sharing application include: Lea Michele, show creator Ryan Murphy, and Chord Overstreet. Fans eagerly await pictures from the actors whenever they tweet that they are on set.

Recently, the Glee crew welcomed Hollywood director/choreographer Adam Shankman back into the fold to direct their Christmas episode, “Glee Actually” (due to air December 13th on FOX) and this resulted in a constant flow of pictures for the fans. Sharing these photos from set helps build hype for the episode and entices fans to tune in to see the story behind the snapshot; how is Artie Abrahams, apparently confined to a wheelchair, up walking around? What brings Damian McGinty back to the world of Glee after his arc ended last season? Mr. Shankman has done a pretty good job winding up the fans to get them to tune in. Let’s hope that translates into higher ratings for the show when the episode airs.

Fans are also able to get in on the action when the show decides to shoot on location (instead of their usual soundstage). Filming locations are usually pretty easily accessible and fans in the area usually head over to the location to find the set and get the scoop on upcoming storylines. Scoop that is disseminated almost instantaneously via videos, pictures and blog posts (thank you Mr. Smart phone). This is exactly what happened for the Christmas episode when Glee filmed at Bryant Park’s outdoor skating rink in NYC. For 11 hours: cast, crew and fans gathered to watch as fan favourites Blaine Anderson (Darren Criss) and Kurt Hummel (Chris Colfer) filmed their duet for the holiday song classic, “White Christmas.” Fans were live tweeting the happenings from their phones, giving everyone on the internet the ‘In’ on what was happening, offering multitudes of photos and videos chronicling every second. 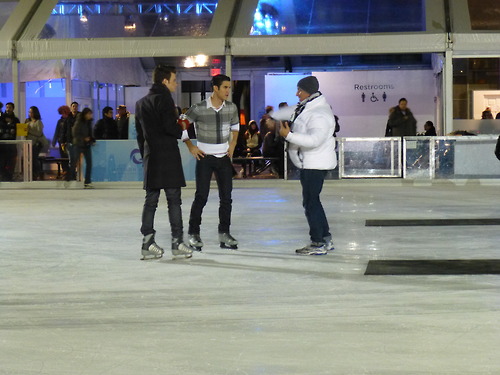 Perhaps show runners and security don’t like that fans are providing spoilers all over the Internet but they don’t seem to try and stop it all that much providing enough information for posts such as this.

And don’t think for a second that the cast & crew are oblivious to what the fans share out. On the red carpet for Trevor Live this past Sunday Adam Shankman referenced a video taken of him dancing on the ice with Chris Colfer. He also talked about how he loves the fans enthusiasm for the show and that he gets to interact with them via social media on a daily basis. 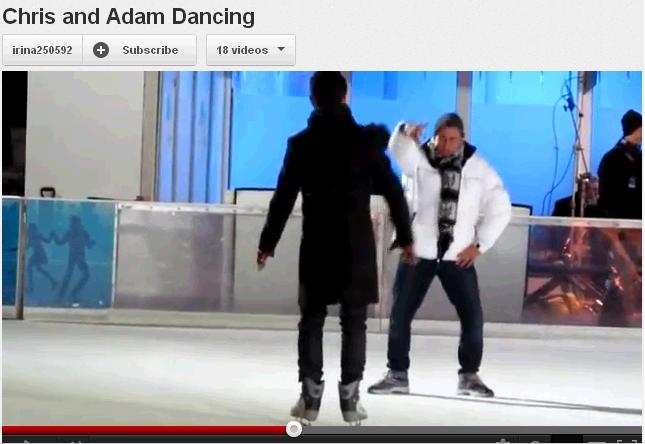 Being a part of the of the fandom myself,  I often stop and think about what the show must look like to the casual watcher. The major plot twists and seemingly crazy song performance choices must seem even more unexpected to those who haven’t known they were coming for upwards of a month. Social media has afforded us so many amazing opportunities in the past few years – thanks to twitter, I’ll never miss another beat. 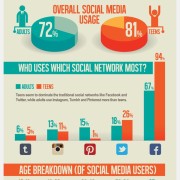